Foreign companies will be forced to disclose ownership before buying English property.

The UK government is proposing to force foreign companies to reveal their beneficial owners before being allowed to buy land and property in England or Wales.

The principal aim is to stop the proceeds of corruption and organised crime being laundered through investments in high-value property, particularly in London. According to the Department for Business, Innovation & Skills (BIS), which is conducting the consultation, a March 2013 survey by the Solicitors Regulation Authority found that a quarter of solicitors’ firms had experienced clients attempting to use property transactions to launder money or commit fraud.

The high values of property in London in particular presents an opportunity for criminals to launder considerable sums of money in one transaction, says BIS. Between 2004–2014, over GBP180 million worth of property in the UK was investigated by UK law enforcement as suspected proceeds of corruption. BIS cites a report by the lobbying organisation Transparency International claiming that over 75 per cent of these properties were owned by offshore firms. This, it says, is ‘believed to be the tip of the iceberg in terms of the scale of the proceeds of corruption invested in UK property through offshore companies’.

UK companies will very soon have to provide information about their beneficial ownership (or Persons with Significant Control) to a publicly available central register. But this will not apply to foreign companies.

At the moment, where a non-UK company registers its legal ownership of land in England and Wales, the Land Register shows the name of the company and its territory of incorporation. All companies are also under an obligation to provide their beneficial ownership information to their legal representatives during a property or land purchase as part of the due diligence process.

However, the government believes that the due diligence requirement does not provide sufficient transparency on beneficial ownership information, as it can be circumvented by not using legal representatives. Even where information is provided, it is not made public. Moreover, says BIS, the degree to which the information provided is verified depends on the risk assessment applied by the lawyers handling the transaction, which may not be stringent enough.

The government is thus considering a new regime under which a foreign company planning a UK property investment would have to submit beneficial ownership information in a form that is easily accessible to ‘law enforcement and investigatory organisations’. It would then be allocated a unique identification number, which it would have to provide to the Land Registry when registering a purchase of land or real property in England and Wales, as domestic UK companies already have to do. (Property transactions are a devolved matter, so that Scotland and Northern Ireland would have their own rules.)

As a first step, the Land Registry is publishing a dataset containing the legal owner and addresses of all properties owned in the UK by foreign companies.

There may be an exemption for foreign companies incorporated in jurisdictions which already have an accessible central register of beneficial ownership information – which will include all EU member states once the Fourth Money Laundering Directive is implemented. This would avoid the need for them to provide the same information to a UK register.

A question for Vancouver real estate owners, and those effected by the meteoric rise in real estate prices in the city over the past decade is, will this sort of measure come to Canada?  See below, for the data supplied by the Real Estate Board of Greater Vancouver. 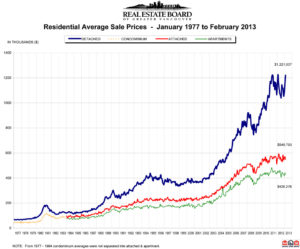